Welcome back to Jon’s site, along with the latest updates. This week has been a busy one for Jon and the team, as all the songs from the latest record have been fully remastered and updated, to include thirty second snippets. To enjoy the latest improvements, simply go to each section of the site, whereby the latest versions will be playing.

The site is continuing to undergo changes and improvements, as a new section of the site is being included. We’ve added a tour section, where you will be able to see Jon and his band The Experience perform in the near future, as well as ongoing dates that will be added. You’ll also experience music from previous albums and a nice background cover to set the mood. There’s a proposal in the works for Jon and the Experience to play in times square as one of the featured artists on the billing. The proposed date is for September 18th, as part of New York City’s plan to bring people to the city and revitalize the entertainment industry. We’ll keep you appraised of the progress as updates continue.
Stay tuned, more to come.

Jon and his band The Experience, are currently working behind the scenes, in order to write, record and Co Produce Jon’s fifth record entitled: “Searching for Goldilox”. This record is very unique in the fact that it’s the first record that features Jon’s live band in the studio. It includes fifteen new tracks to include the title track, along with future hits “Let me in your heart”, Mom, This or something better and Jon’s first Christian song entitled “thank you for the pain”.

The record has Jon’s signature Piano and Drum sounds all over it, but with an even broader range of styles than in past records. The new record also includes multiple producers as well as some special guests that will be prominently featured on the record and is almost exclusively being recorded in Jon’s new and permanent home in Nashville Tennessee.

Look for a release of the new record sometime near mid 2022. You can find the record here on the official website, as well as in major retail stores and on I tunes, Spotify, Amazon and many more sites.

“Don’t Wanna Own the World” now playing at Subway stores

“Don’t Wanna Own the World” now playing at GAP stores 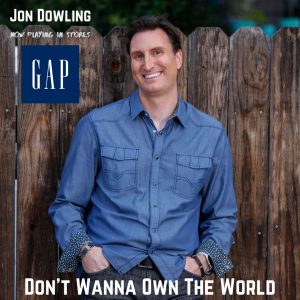 “Don’t Wanna Own the World” now playing on Royal Caribbean 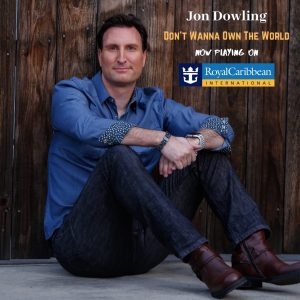